We have been shocked over the weekend by the devastating earthquake that has struck Nepal and the surrounding areas.

The immediate needs for the people of Nepal are WATER, FOOD & SHELTER.

At least 3,326 people are now known to have died in a massive earthquake which hit Nepal on Saturday, say officials.

More than 6,500 people have been injured, according to the National Emergency Operation Centre.

Dozens of people are also reported to have been killed in neighbouring China and India.

Thousands have spent a second night outside after the 7.8-magnitude quake, which also triggered deadly avalanches on Mount Everest.

Vast tent cities have sprung up in Nepal’s capital, Kathmandu, for those displaced or afraid to return to their homes as strong aftershocks continue.

“We don’t have a choice, our house is shaky. The rain is seeping in but what can we do?” 34-year-old shopkeeper Rabi Shrestha, who was sleeping by the roadside with his family, told AFP news agency.

Rescue missions and aid have started arriving to help cope with the aftermath of the earthquake, the worst to hit Nepal for more than 80 years. 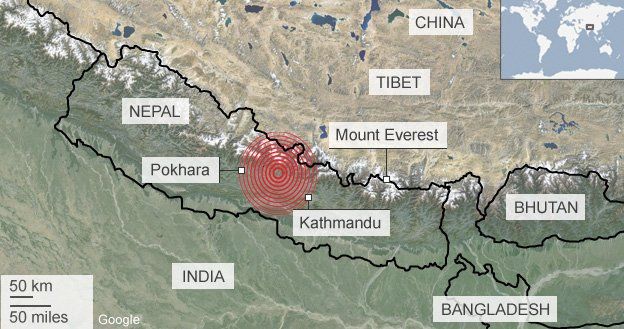 The weather cleared on Monday morning and helicopters are heading out to the Mount Everest base camp to try to bring down 210 stranded climbers.

The roads to the earthquake’s epicentre, northwest of the capital, have also been cleared and rescue teams are on their way.

Efforts to dig victims out from under the rubble of collapsed buildings in Kathmandu are also continuing.

But home ministry official Laxmi Prasad Dhakal told Reuters rescuers were “in a really bad shape” after working non-stop for two days. “We are all about to collapse.”

Meanwhile, officials have warned that the number of casualties could rise as rescue teams reach remote mountainous areas of western Nepal.

“Villages like this are routinely affected by landslides, and it’s not uncommon for entire villages of 200, 300, up to 1,000 people to be completely buried by rock falls,” World Vision spokesman Matt Darvas said.

A man evacuated by helicopter to Pokhara, 200km from Kathmandu, said almost every home in his village of more than 1,000 houses had been destroyed, Mr Darvas told the BBC.

In Dhading district, 80km west of Kathmandu, people were camped in the open, the hospital was overflowing, the power was off and shops were closed, Reuters news agency reported.

A powerful aftershock was felt on Sunday in Nepal, India and Bangladesh, and more avalanches were reported near Everest.

The 6.7-magnitude tremor, centred 60km (40 miles) east of Kathmandu, sent people running in panic for open ground in the city.

It brought down some houses that had been damaged in the initial quake.

At hospitals rattled by the aftershocks, staff moved sick and injured patients outside on Sunday afternoon.

Both private and government hospitals have run out of space and are treating patients outside, officials say.

Deepak Panda, a disaster management official, said medical services were “overwhelmed with rescue and assistance requests from all across the country”, Reuters reports.

Foreign climbers and their Nepalese guides around Mt Everest were caught by the tremors and a huge avalanche that buried part of the base camp in snow.

At least 18 people were killed and 60 more injured; many people are still missing.

Separately rescue workers have told the BBC that climbers stranded on Everest have been unable to get down because climbing ropes and ladders have been swept away by a series of avalanches.

Tourism Minister Deepak Chanda Amatya told the BBC that more than 50 climbers had been rescued. 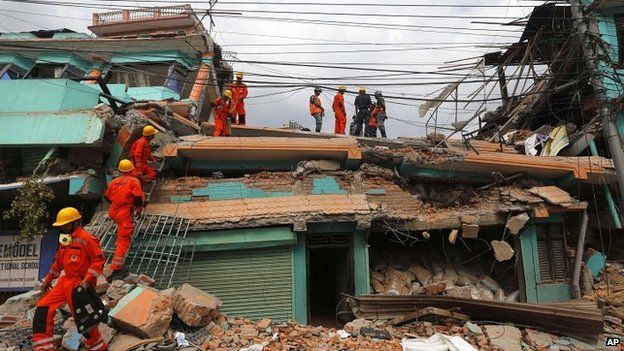